"You know, for a freakish amalgam of mechanical components, he's damn shiny." 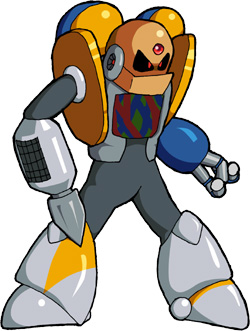 The rude and brash Warp Man is the Fatal Five's counterpart to the Seven Mercenaries' Quint and was designed by Hunter himself. He holds something of a grudge against Hunter and his team of Mercenaries because of this.

He has little to no respect for anyone or anything, reserving his trust only for himself. This constantly keeps him at odds with team leader Riff. He even resents the fact that he's allied with Wily. I personally think he's one of those "I hate the world" types. He also seems to be a slight coward, despite what he's capable of.

Warp Man has many abilities based on those of existing Robot Masters with temporal distortion powers, such as Flash Man. Sounds like he almost fits the description of the Doc 'bots. Unfortunately (for him, anyway), he's still technically a prototype, and thus has a few critical flaws; most prominent of which being a short battery life, which has cost him a number of victories.

Warp Gate is Warp Man's signature technique, and one of the very few things unique to him. It's capable of sending whatever is thrown in up to half a kilometer away in any direction the user chooses.

One could say Warp Man is the originator of Quint's "Saku-arm" -- an adaptation of Sakugarne that's more a piece of armor than a vehicle, fitted onto the right arm. Being the first version, Warp Man's isn't quite as versatile as Quint's.

Ehh, Warp's a jerk. He and I don't talk much, thankfully. Don't see how the other members of the Five stand him. Er, now that I think about it... There's no telling if he can get to me here in Narratorland with all his warping power things, all things considered, so I'd better just stop here.