"Many faces, one identity. Funny how that works." 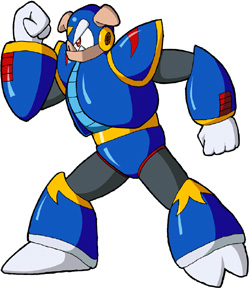 Well, he also goes by Jeremy, but that's for other personas. Megaman Teams: where schizophrenia is funny.

Stardust is a strange mix between a fun-loving, relaxed guy, and a plan-maker who gets irritated when people don't follow it. However, if there's one thing he doesn't like, it's being kept in the dark about important issues. Hunter can attest to that.

Not that I know of, but Stardust has the means for it. Let's judge.

First of all, his massive frame. You can pack quite a punch with that. As his name shows it, he has a storm generator. It can go from tornadoes to wind shields to ... wind blades, maybe ? And if that wasn't enough, he has the Hyper Blast - a huge blaster with short range and big firepower. Pretty nice for cleaning up some dust.

Actually, it happened at the beginning of Season Two : the Mercs just got beat up by the Fatal Five (Hunter's part-creation) thanks to a database about them (Hunter's work). He was quite miffed about this. In the end, he left the Team, but not without getting a replacement. But that is for another time...

Stardust was quite big and loud - but it came with the body, I assume. All around, he was an okay person. Dunno what he's up to, nowadays, though...