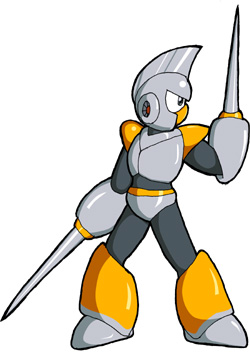 The knightly member of the Fatal Five, Staccato is the Fatalists' answer to Enker of the Mercs. It's said there are design similarities to Knight Man. I can believe it.

Staccato's a gentleman and quite the man of honor, not to mention fiercely loyal to Riff. He dislikes sneaky tactics, calling them dishonorable, but will follow through with them if he needs to. He also has this odd old English speech thing going for him.

You assume correctly. He's not really the walking arsenal that some of the other Fatalists are, being restricted to the rapiers built into each of his arms. He knows a number of different sword techniques, though. He doesn't do much, but he's good at what he does. A duelist, through and through.

To be honest, I've never really interacted with him at all. At least not one-on-one. So... I can't really say. I'm not sure how long I'd be able to keep up conversation with him, though. Thou wouldst agree that his manner of speaking doth get on one's nerves at times.

... Methinks I'm starting to talk like him. Pardon me.