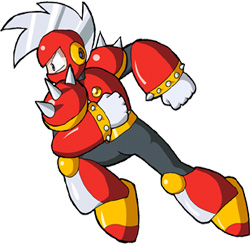 Shinobu... a humble game store employee-turned-spikey warhorse of the Rockman Killers by Dr. Wily. He hasn't let his newfound robotic nature get in the way of his mundane life, continuing his work between missions. Talk about dedication. In the team, he serves as the peacekeeper of the group, surprisingly enough.

Despite his appearance, Shinobu is probably the least aggressive member of the team. He's a no-nonsense kind of guy and quite levelheadded, though he does have his moments, particularly in the presence of Mega Man and the Kool-Aid Man.

Oh, he does fight when he needs to, that being for most all of the Mercenaries' missions.

He mostly keeps to melee range with his signature bowling technique and Screw Crushers. He packs a lot of power, being the second-heaviest hitter in the crew, so he's often turned to for demolition when Hyper Storm can't quite fit.

You know, to be dead honest, I can't say. He's rarely around, and when he is, we don't talk. He's pretty much just "that guy you know the name of but not really anything else". *shrugs*