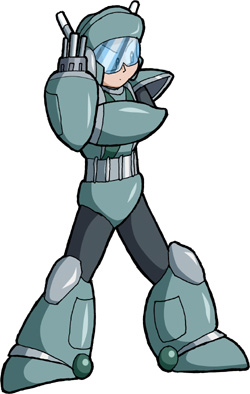 Riff is a Fatalist, and the counterpart to Ballade of the Seven Mercenaries. He was designed by both Wily and Hunter, and respects both.

He tends to think he's a Sergeant, and the Fatal Five are his squad. He's not a bad leader, per se, but his plans ... well, they always seem to be lacking something. And good luck trying to put some teamwork up when Warp Man's around. Either way, he's pretty confident as long as things are in his favor, but he seems to be prone to panic attacks if the situation goes sour, though he's not about to let the other Fatalists see it.

Riff is deeply loyal to Wily, but doesn't see his mission of defeating the Mercs as a holy crusade; he's just doing his job. It's a nice change from some Robot Masters...

Riff has a commando-style arsenal : a rapid-fire gun for a hand, missile launchers hidden here and there, and some hiding stuff if needed.

He also has the wonderful ability to coordinate the attacks of his teammates, which seals his leadership position. Sadly, this tends to crumble when trouble or Warp Man shows its ugly face.

Riff ... he's an okay guy. He's not of the "I WILL CRUSH YOU" villain type, and seems on actually good terms with Hunter - his fellow leader figure.

Honestly, it's a wonder he didn't snap from dealing with Warp Man on a daily basis. And Lento sometimes.