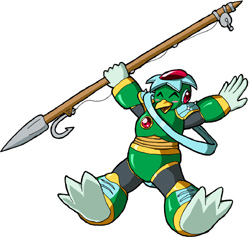 MWS was created as a replacement for Falling star after he went "MIA" during the War. Wily took the liberty of programming an AI into him in case no one would come to fill the position (which no one did), but in the end, spite made the childish-looking asshole kappa we know now.

Entirely true, which is a real oddity among the Mercs. He's a bit bitter about it, but the rest of the team has pretty much gotten used to his mostly harmless ranting on the topic. And his lack of disguise still doesn't stop him from going out on the town with his fellow Mercs, much to their dismay.

Um... can't say. He's a bit of a troublemaker, I know that much. I suppose there's one in every family. He doesn't really have as much of a disregard of everything as one may think. Considering how rebellious he seems, it comes as something of a shock when you notice how (albeit reluctantly) obedient he is to authority figures, particularly Hunter. Whether or not it's because of the free living space is completely unknown.

He may be young as a Robot Master, but he's still a Robot Master. He has the typical Mega Water setup: control of water, primarily in liquid state. He doesn't carry an endless supply of harpoons like his predecessors, though. Instead, he has a single rusty harpoon-fishing pole nearly twice his height that he carries everywhere.

Then again, a six-foot pole is nothing really unusual. It's just MW's own height of three and a half feet that makes it seem unrealistic. He seems to have no trouble using the weapon as a fishing rod, a grappling hook, a harpoon, and a javelin, among other things.

Uh... he kinda creeps me out. Always threatening me. Or something. I still have yet to find out what a shirikodama* is, but something tells me I don't want to know.

* - Unless this profile writer is sorely mistaken, it has a number of interpretations, but in this case it's referring to one's entrails, removed through the anus. Ugh. Check this link for more on traditional kappa lore.