"'Slow and steady wins the race' only goes so far, you know." 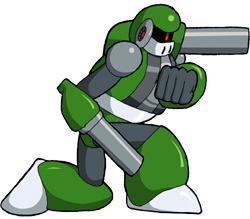 Big, strong, heavily-armored and with brains slower than a glacier: that's Lento, the big guy of the Fatal Five. He's the counterpart to Punk of the Mercenaries.

At first glance, what many people will think is that Lento is big, strong and dumb. Two out of three are right. You see, Lento was built with a weapon that can affect time, and effectively slow down his targets. But since he's Wily-built, it affected his brains. As a result, Unit Lento has adopted a speech pattern. Pattern can grow tiresome on other units after a short time.

Lento is a deep thinker, possibly a philosopher and the smartest of the Five: but since people aren't familiar with hour-long thought developments, it goes unseen.

This guy prefers to rely on Wily and Riff to do the short-term thinking, and to give orders that he'll follow. To say Lento has problems improvising is an understatement.

Not nearly. That time-affecting weapon only refers to Lento's signature weapon: the Slowdown Cannon, which he carries on his back. This mortar can fire spheres which will, guess what, slow the target down, sometimes to the point of immobility. Note that it wears down after a while. The other Fatalists were built with counter-systems to this, and are partially immune to its effects -- they mostly end up with a headache.

The rest of Lento's body is filled with weapons. Lots of them. From cannons to rockets to side-missiles to a chainsaw blade in his left arm: one could say he got gifted when they distributed weapons. Add to that Lento's size and armor, and you have a robotic Heavy Weapons Guy.

I don't really mind Lento: he just follows Riff around, and once in a while has a good idea. But you gotta be patient first. Very patient. That said, he has some good jokes. And his philosophy speeches are worth hearing.