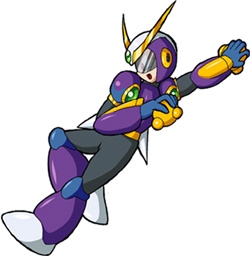 Not as strange as Warpman or Naoshi, I say.

She's a Merc, and more precisely a member of the Rockman Killers. If there were any kind of hierarchy there, I'd say she's number two. She claims her identity to be her lack thereof and that she only answers to "Kayorei" for ease of reference. Whether or not this is true is completely up in the air.

Kayorei has a rather complex personality: patient to a fault, difficult to motivate, among other things. That said, she's extremely honest (bordering on too much information at times), and favors neutrality, which makes here the mediator/diplomat of the team.

But all this flies out the window when the Hoff enters the picture...

Ah, er... long story short, a certain plot gone terribly wrong. The end result: Kayorei now has a hatred for Hasselhoff that borders on... no, correction... is irrational. She won't hesitate to use every bit of her firepower against the guy, which has some rather unpleasant results for he on the receiving end. Lucky for everyone else, she doesn't seem to have nearly as much of a temper otherwise.

The Ballade armor is designed around speed and heavy explosives -- these are called the Ballade Crackers. These nice instruments of destruction can bounce around, or be left laying around as mines of sort. Also, Kayorei has no "special attacks", because she considers the whole "shouting your attacks" a bit silly. I can't really blame her; besides, she gets the element of surprise.

She's a nice person, and probably the most balanced of the Mercs. Even if we disagree on a few things, we're together on such matters as the Hoff.