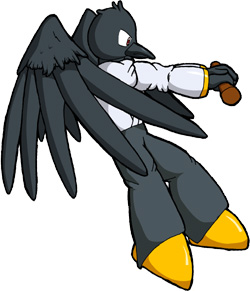 Karasű is the odd man out in the Fatal Five, the magic-using raven Robot Master counterpart to the entirety of the Genesis Unit (Buster Rod G, Mega Water S, and Hyper Storm H).

Yeah. I don't really get it, myself. And on that note, apparently neither of us really understood Magic Man, either.

Karasű is a trickster and has a knack for stirring up trouble, but he's in truth one of the more level-headded members of the Fatal Five. He tends to take it upon himself to point out the team's flaws and despite his loyalty to Riff, he prefers to keep to himself. Contradictory statement if I ever saw one.

Well, Karasű's not limited to your basic parlor tricks; definitely more than smoke and mirrors. From levitating (and completely defeating the purpose of those gi-normous wings) to magical fire to invoking terrible cosmic advertising horrors; you name it, he's got it, or at least something that resembles it.

One of his more recently-learned tricks/spells allows him to summon crow minions about the size of a Metool, but they've yet to show their worth for anything more than a means of entertainment.

He's okay. We seem to do a lot of work keeping the other Fatalists motivated, in line, or both. And let me tell you, he has some of the craziest stories about those guys... but I promised I wouldn't tell anyone else.