"Give him some cymbals and he'll really be in his element." 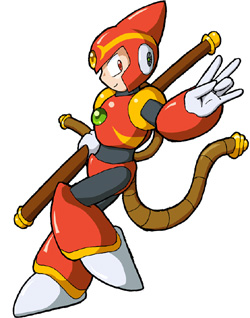 Once a simple toy robot monkey, converted by Dr. Wily to the simian member of the Genesis Unit we know today. He's been the tech man (monkey, whatever) for the Mercenaries since the founding of the team.

It's a long story. To put it simply, Dr. Wily upgraded him to genius-level intelligence when the conversion from toy to Robot Master was made. Not sure why Wily didn't program unconditional loyalty to him to go with the brains, but that's another mystery for another day.

Well, when he's not caught up in fixing stuff or in the heat of battle, he can be a rather childish person. It's probably due to the nature of his former being. Iga's also very confident in his ability as a mechanic, claiming there's nothing he can't fix.

As Buster Rod, his abilities haven't changed much, meaning he's still effective in combat. He's mostly proficient in at melee attacks, though he does have a standard buster arm in case he needs more range.

Buster's namesake Rod is his primary weapon, exhibiting a number of abilities; including, but not limited to, deflecting bullets and changing length.

When he's not up to any monkey business *dodges a brick*, he's okay. If he's allowed to escalate, though, things can get silly really fast. I guess he's nice for a giggle, though he will make intellectual conversation. Really a mixed bag.