"This mess is all his fault" 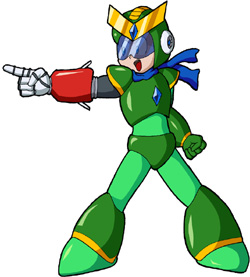 Hunter is a visitor from an apocalyptic future stranded in our present day. Only fitting for the temporally-displaced guy to be converted into the originally temporally-displaced Mega Man double by Wily. He's been the reluctant primary representative for the Mercenaries since the founding of the team.

The Mercenaries have no real leader. The decisions for the team are, for the most part, made by the team in its entirety. Hunter, being the founder, represents the team for matters of business, thus making him the closest thing the team has to a chief... and that's in name only. It's... complicated.

It's a little hard to say. He's non-confrontational, not very social and is relatively apathetic; the last point leading him to be very difficult to surprise. He'd just as soon share a drink with his enemies as fight them. The status quo is of the highest importance to him, however. If anything seems out of place, particularly in regards to the team, he'll go to great lengths to see that the wrong is righted.

Hunter does seem to be a secretive kind of person, having hidden a number of things from his teammates; including, but not limited to, his hand in the creation of the Fatal Five, their arch-rivals. Oh, and he also has this thing for guns. Go figure.

Not at all. His choice of weapons still doesn't range far beyond Sakugarne, but there have been a number of key changes.

For starters, Hunter's iteration of Sakugarne is no longer a pogo stick-jackhammer. Instead, it's been converted into more of a piece of armor over his right arm. It maintains its jackhammer function, but the head can also be swapped out for a Buster for long-range combat and a normal hand for added dexterity... among possible other undisclosed abilities.

Well, he lined up this narrating job for me, so you could say I wouldn't even be here without him. Which could go both ways. He's still a good guy, even if he and I argue a lot. Probably has something to do with the crazy scripts he hands me.